St.Stephen First Martyr of the Church Get Involved

St. Stephen the first martyr of Christianity, in whose name our church is named, was a deacon in the early church at Jerusalem, who aroused the enmity of members of various synagogues by his teachings. Accused of blasphemy, at his trial he made a long speech fiercely denouncing the Jewish authorities who were sitting in judgment on him and was stoned to death.
The apostles had found that they needed helpers to look after the care of the widows and the poor. So they ordained seven deacons, and Stephen is the most famous of these. God worked many miracles through St. Stephen and he spoke with such wisdom and grace that many of his hearers became followers of Jesus. The enemies of the Church of Jesus were furious to see how successful Stephen’s preaching was. At last, they laid a plot for him. They could not answer his wise argument, so they got men to lie about him, saying that he had spoken sinfully against God. St. Stephen faced that great assembly of enemies without fear. In fact, the Holy Bible says that his face looked like the face of an angel.
Stephen spoke about Jesus, showing that He is the Savior, God had promised to send. He scolded his enemies for not having believed in Jesus. At that, they rose up in great anger and shouted at him. But Stephen looked up to Heaven and said that he saw the heavens opening and Jesus standing at the right hand of God.His hearers plugged their ears and refused to listen to another word. They dragged St. Stephen outside the city of Jerusalem and stoned him to death. The saint prayed, “Lord Jesus, receive my spirit!” Then he fell to his knees and begged God not to punish his enemies for killing him. His martyrdom was witnessed by Saul of Tarsus (later better known by his Roman name, Paul), a Pharisee who would later become a follower himself of Jesus and an apostle.
Stephen is venerated as a saint in the Anglican Communion churches and other traditional churches. Stephen’s name is derived from the Greek language Stephanos, meaning “crown”. Traditionally, Stephen is invested with a crown of martyrdom. 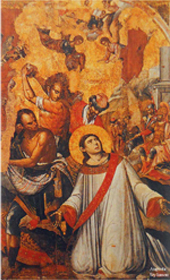 “Then he knelt down and cried out with a loud voice, “Lord, don’t hold this sin against them!” After he had said this, he died. ”